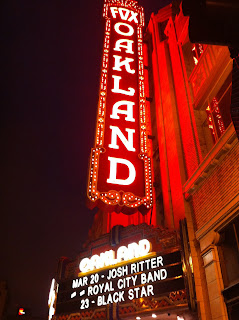 Two weeks ago, I didn't even know who Josh Ritter was, and last night I went to see him at the Fox Theatre in Oakland, California because I won two tickets as first prize in a writing contest. A wonderful local indie bookstore--Book Passage--held a short story contest that had "music" or "musicians" as its theme (< 2500 words) and it just so happened I had a story with that theme, "The Sound of Dreaming" so I dusted it off, sent it in, and lo and behold, I won! Dining before the show at the fabulous Flora right across the street from the Fox, a good friend and I (a couple+ cocktails the better) ambled over to the Fox, found our seats perched at the edge of the bar/mingling platform and with a great center-stage view of not only the stage but also the soundboard and lighting mix panels (which I love to watch), and settled in for the show. 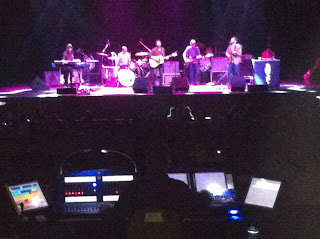 Ritter is a very engaging and simpatico performer, starting out alone on stage with a plugged-in acoustic guitar, and his band members join him one by one. Great drummer and keyboardist! The enthusiastic audience knew all the songs and applauded the opening strains of favorites. His songs are melodic and all about love--here, gone and to come. A thematic keynote was sounded in one song titled "Hopeful" -- my friend commented that she found all his music very positive, gentle, encouraging and update -- something that struck both of us as unusual for this generation's music (Ritter is in his late thirties). But at the same time, there was another song that seemed also to be a signature piece--its refrain was "Don't you leave us in the dark" followed by repeated crooning of "ooh-ooh-ooh" which the audience lovingly joined.

A similarly sweet ballad, "Change of Time" was also an audience favorite; here's a little clip, Ritter is singing "Time, Love...It's only a change of time."

Like a robust wine (or, alternatively, an artisanal hearty soup), there were tastes and flavors of influences from music of the 70's and 80's which my friend and I, being women of a certain age, could easily identify--to the point that upon hearing the opening organ riff on one song, we turned to each other and said in unison, "Like a Rolling Stone!" Other notable musical references were: Tom Petty, Paul Simon, Gordon Lightfoot, the Doors, and Mark Knopfler. But this is neither a judgment nor a criticism. I imagine it's virtually impossible not to sound a little like the great musicians who've gone before you (ask Brahms about "Beethoven looking over his shoulder"). It was actually enjoyable to hear whispers and ghosts of classic rock and roll alive again and thriving in the ever-evolving sound and lyrics of succeeding generations.

Ritter is a natural storyteller, like Bob Dylan, and with one song titled "Folk Bloodbath", I was reminded both by the music and the lyrics of Dylan's great "Tangled Up in Blue." Sweet and strange the story unfolded, but I felt as if Ritter was not reaching his depth potential, as if he hasn't quite lived the story he's telling here--but I'm looking forward to his music and stories in the years to come, when more experience and just more travelled miles on the earth will bring his potential to greater fruition.

(Note: the opening act--Sea Wolf--was really good if a little too loud for my taste, but very well-done and heartfelt. VERY cool.)
Posted by mfb at 11:14 AM No comments: Links to this post 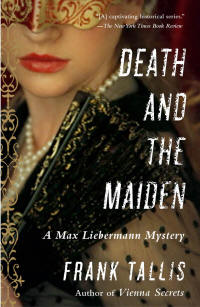 Sixth in a series starring psychoanalyst Max Libermann, a “consulting” psychiatrist to the Prague police department, Death and the Maiden does not disappoint, whether you’re new to Max or have been long acquainted with him and his detective friend Oskar Rheinhardt. If you’ve never read one of Tallis’ mysteries, I urge you to start with the first one (A Death in Vienna) and read them all, although I started with the sixth and it was so immediately engaging that I quickly went to the library and got all the previous books and read them, one after another. In Death and the Maiden, as in all the books, music and opera—with real-life conductor/composer Gustav Mahler at the helm of the Vienna Opera House—play a major role. The plot circles around a dead diva and widens to include high-placed politicos and even royals, creating treacherous sinkholes that threaten to engulf both Max and Oskar. 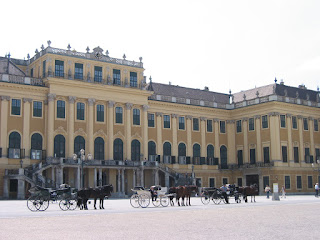 Tallis clearly loves Vienna, and he spares no mouth-watering detail when describing the pastries and whipped-cream-coffees that Oskar and Max frequently devour while pondering the clues and suspects. The city of Vienna, some ten years before the Great War begins, is also described so colorfully and clearly that you truly feel you are there, even including the growing threat of anti-Semitism, for which we shudder on Max’s behalf. In addition to Mahler, Sigmund Freud is a recurring character, the “great man” of his field whom Max visits and admires—and he’s always telling groan-worthy Jewish jokes, very funny. Well-crafted mysteries and murder stories, serious and very likeable characters (including a very interesting love interest for Max) and complete immersion in early 20th century Vienna combine to make this series a really satisfying read—and it’s been optioned for television, which should be fun, too.

Posted by mfb at 3:16 PM No comments: Links to this post