The Protestant Cemetery in Rome - Where Poets Lie Easy 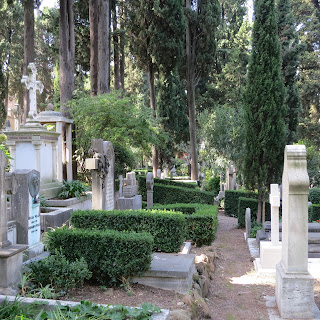 I was rambling this morning through the Protestant Cemetery in Rome, in the Testaccio neighborhood, because it was a place revered by Henry James, who tenderly placed his candidly shocking little American heroine Daisy Miller in its hallowed precincts: "Daisy's grave was in the little Protestant cemetery, in an angle of the wall of imperial Rome, beneath the cypresses and the thick spring flowers." I wandered to the grave of Keats with its modest epitaph, and then searched for some minutes and found another grave, that of Constance Fenimore Woolston, an American writer, grand-daughter of James Fenimore Cooper, and intimate friend of James. She reportedly committed suicide in Venice, throwing herself out the window of the Palazzo Semitocolo (I took a photo of that, too, when I was in Venice 10 days ago), where James soon after the melancholy event visited and burned all of his correspondence to her, among other things. The scene, and his feelings about it, are tellingly, dramatically, movingly portrayed in Colm Toibin's magnificent book The Master. Percy Bysshe Shelley is buried there, too, along with the sons and daughters of many illustrious "non-Catholic foreigners": Goethe and Bach among them. A melancholy and beautiful place, well worth the long walk outside the Eternal City to visit the remains and think about time passing. 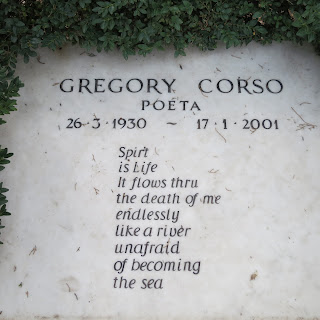 But a final, more modern note! It came as a complete surprise to me to find the grave of Gregory Corso, the Beat poet, who died in 2001 - his epitaph is well worth remembering and pondering.

Posted by mfb at 7:41 AM No comments: Links to this post


I found a copy of this book in the apartment in Rome where my husband and I are staying for a week, after touring other parts of Italy (Florence, Siena, Venice, Orvieto). I wouldn't have even started reading it except that we both came down with colds and needed to 'stay put' for a day or two -- WHAT a fantastic book! Of course, it's a Pulitzer Prize winner, but I had never heard of it. Jones' historical/magical-realism about the fictional Manchester County in Virginia, is a masterpiece of engaging characters, subtle language, fancy and fact. I just saw a quote from Hemingway that said something like a writer's object is not just to tell someone a story, but make the reader feel as if he or she had actually lived the story -- and that's just what Jones' book does. The characters of his black people -- slaves and free -- are enticing and very real, very human; the white folks just the same: good, bad, religious, sacriligious. The fact that there were free black people, former slaves, who went on to own land and then their own slaves is a troubling and astounding theme of the book, and very well presented from many sides of the question. Jones plays with time and events, shifting from present to future to past but seamlessly and effortlessly (it would appear). A remarkable book, worthy of time and thoughtfulness as you read it. So glad it serendipitously appeared to engage me during my 'downtime' in Rome. Now it's off to St. Peter's!

View all my reviews

Posted by mfb at 9:50 AM No comments: Links to this post