Review: Creole Son: A Novel of Degas in New Orleans 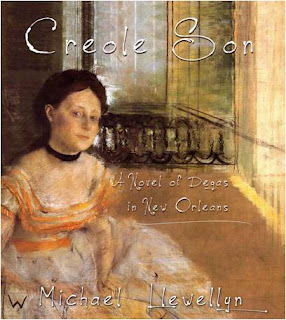 Artist Edgar Degas is justly famous for his many lyrical and revealing paintings of ballerinas, but in Michael Llewellyn’s Creole Son: A Novel of Degas in New Orleans, we are presented with a fascinating portrait of the sometimes irascible but emotionally restrained artist himself. Having left Paris after the horrors of the Prussian invasion and the terrifying slaughter of the Paris Commune, Degas sought solace in his mother’s birthplace of Le Nouveau Orleans, among the aristocratic remains of the Creole population brought low by the ravages of the Civil War and the oppressive Reconstruction Era. Llewellyn, who lived in New Orleans for a number of years, writes convincingly of a chaotic, sensual, dangerous and exotic city that is seething with racial tension, criminal politics, sexual license and moral ambiguity. Degas finds himself both repelled and intrigued by the chaos of a people trying to re-build their city after the devastation of war, lamenting what has been lost and trying to avoid inevitable changes. When I started the book, I had no idea it was going to go to these dark places, but with Degas as a companion, it was enthralling to experience the strange and haunted streets and cemeteries, Mardi Gras balls and brothels, as well as the intimacy of his daily life in his mother’s family. Llewellyn crafts a strong and persuasive argument for New Orleans having brought Degas to a new and daring way of painting, experiences that freed his artistic abilities as much as they opened his heart and soul. The descriptions of how Degas thought, observed and painted his subjects are finely wrought and very well written, showing detailed knowledge of the artist’s style and methods. A book to be savored.
Posted by mfb at 9:04 AM No comments: Links to this post