Virginia, Orlando, Vita -- A Sense of One's Self

First, a little context:  I've just read a new biography of Vita Sackville-West, by Matthew Denison, which was interesting enough (this was for the Historical Novel Society Review, and will appear in print in a few months), but it prompted me to actually read one of Sackville-West's novels. The library had only one, "All Passion Spent", a book which is referred to by critics as the "fictional response" to Virginia Woolf's "A Room of One's Own."

And there, very close by on the library shelf, was Virginia Woolf's "Orlando" -- her tribute to Sackville-West's strange and amusing self-concept of being both male and female, and spending a good deal of her life dressed as a man and having affairs with women (Virginia included). Library serendipity showed me the way, and I checked out both books.


Okay, let's look at "All Passion Spent": Published in 1931 and 'contemporary' to the times, we find Lady Slane, now in her early eighties, with five children well into their sixties, and herself bereft of her larger-than-life, statesman husband after sixty years of dutiful Victorian marriage. Contrary to the narrow-minded and condescending expectations of her children, she strikes out on her own, moves to a small house on Hampstead Heath, and bans all children, grandchildren and great-grandchildren from visiting her. Instead, she takes up with a few odd but amusing characters in her new life, and embarks on a quiet and satisfying reflection of just exactly what her life has consisted in all these many years.

After having read the biography of Sackville-West, which is bursting with rebellious bohemianism, love affairs, dramatic fights in the streets (seriously!) and lawsuits of varying degrees of sordidness, I wasn't prepared for the tame ruminations of an elderly lady, but the writing was lively and lovely, the reflections on life were sound and thought-provoking, and altogether it was a thoroughly enjoyable novel. Sackville-West put a lot of herself in her novels, quite clearly, and it seemed to me an interesting way of providing one's self with therapy, parallel lives, and projections into the future (or the past) in order to experience more of everything: life, love, drama, happiness, dreams. 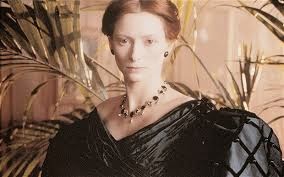 Now, for "Orlando": I had seen the movie version, starring Tilda Swinton, and after reading the book, I'm eager to see the movie again--because now I get it. I think reading the biography of Sackville-West was very helpful, especially as it gave me the major clue 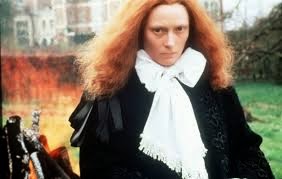 of "A Sense of One's Self" as the moving principle behind the structure and meaning of "Orlando." The man-woman Orlando lives for hundreds of years, and experiences time and change, war and peace, love, death, marriage, childbirth, poverty and riches. Woolf makes a very good case for any individual being to find the way to live dozens of lives through imagination, daring, eccentricity and iconoclasm--a tall order for any one human person.

Woolf's language is, as always, sublime and delicious, sensual, provoking. There were passages that reminded me of Allen Ginsberg and Lawrence Ferlinghetti, such as this passage:

But wait! but wait! we are not going, this time, visiting the blind land. Blue, like a match struck right in the ball of the innermost eye, he flys, burns, bursts the seal of sleep; the kingfisher; so that now floods back refluent like a tide, the red, thick stream of life again; bubbling, dripping; and we rise, and our eyes (for how handy a rhyme is to pass us safe over the awkward transition from death to life) fall on---(here the barrel-organ stops playing abruptly).

Compare this to Ferlinghetti:

There is a similar psyche at work here, a similar flow of language and thought (Woolf being one of the initiating 'stream of consciousness' writers, of course), a way of looking at the world that is both detached and emotional, amused and grim.

Ultimately (at this point) what "Orlando" means to me is the celebration of the eternal creation of the human mind and spirit -- we are boundless in our imagination, in our thoughts, if only we dare to travel through the chains of time and space and convention, and see all the other sides.

Posted by mfb at 3:43 PM No comments: Links to this post