The Turkey and the Maze

I set out on my second day at Four Springs (for a personal writing retreat) to walk in the woods, and to find the Stone Circle. I started on a path after looking at a crudely drawn map of the property (“Not to scale” someone had written on it; no kidding). The Stone Circle was clearly marked, and I thought I knew the path—it was called the Madrone Trail on the map, but on the grounds, nothing was marked. I trudged down and down, around a meadow, then back up again, up and up, puffing and panting, right back to  near where I had started. Had I missed a turnoff? There had been many trees felled in recent winter storms, perhaps a path had been obscured. I walked past my own cabin again; I stopped for my walking stick this time, and set off on the same path, to look more closely. At the bottom of the hill, I walked a little way off the path, and just stood in the trees, looking around. No sign of anything stone-like, circle-like. I closed my eyes. Please, I said, help me find the Stone Circle. Give me a sign. I spoke, I believe, to the spirit of the wood; to God; to whomever was listening. 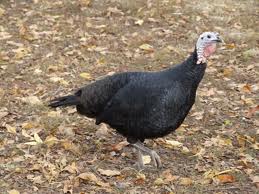 I opened my eyes, and turned to look back up the path I had come down twice. Suddenly, quietly, a black wild turkey stepped daintily out of the tall grass and started picking its way delicately back up the path. Although it seemed to walk slowly, I had to hustle to keep up – it had a good head start, some twenty yards or more, and I didn’t want to make a lot of noise and startle it away. When it came to the rude stairway cut into the hillside that led to my cabin, it turned right up it and climbed to the top. I scrambled after, laboring to breathe. The black turkey began to ascend a fairly steep hillside—I took the path that went around it, and caught up with him at the top. He was just disappearing into some brush, away from the path. The trees were low but sparse, and being winter, the grass was brown, dry, and spare. So, I thought, you’re leading me where there is no path. All right, I thought, I’m game for this. As long as I don’t get lost.

I picked my way down a hillside; the ground under the accumulated leaves was very damp, and I didn’t want to fall or slide down to the bottom. I couldn’t see the black turkey anymore, but when I stood still, I could hear his delicate steps rustling the dry grass ahead of me, going back up the hill. Thank God for my staff. I was soon climbing up another rise, at the top of which there was a little clearing.  I stood in the little clearing and looked around me.

I noticed a tangle of the instantly recognizable dark red madrone trees. Sure enough, a few steps more up a slight rise, and I saw a well-maintained dirt path. At one end, far to the right, a huge tree was lying across the trail, and I remembered seeing that the day before – I had taken it for a sign not to go beyond it – but it lay across the very path I was now on, coming at it from behind – could it be the Madrone Trail?. I looked to my left and saw a cascade of madrones stretching up the path, toward the top of a hill where there seemed to be a large clearing.
I followed the path up the hill. One large stone, two feet wide and four feet high, rose into view as I grew close to the clearing; then another, and another – four in all. And more—there was a maze circle in the middle of the clearing, made of branches and chunks of wood, small and large, long, short – some barely twigs, others the size of fire logs.  I stepped into the maze, following it and meditating joyfully on having at last reached my destination. I stopped in the center, halfway through, and listened to the silence. Out of the woods came a gurgling bird cry—the black turkey (I was sure it was he) gobbled expressively.
“Thank you,” I called aloud. “Thank you!”

Last night I attended a 90th birthday celebration for Jack Kerouac, hosted by and held at the Beat Museum in San Francisco. Walking up funky old Broadway in the early evening was frankly surreal: closed restaurants like A3(including the former Enrico's, now the former something else), the same shabby pocket parking lots, and a newcomer: Penthouse Lounge & Steakhouse (yikes) - new but still in the old style of the A-Go-Go's and girlie shows. Whatever. Anyway, back to Jack. Upstairs at the Beat Museum is a room with special exhibits of first-edition Beat books, lots of photographs and posters. Last night, folding chairs were set up so the crowd could listen to the poetry on offer. One of the most interesting performances was by American Storyteller Chris Chandler; I felt he was truly channeling the spirit of the Beats, and I managed to get most of his performance on camera. Other poets I heard included Phil Cousineau, Richard Rodriguez, and Alan Kaufman.
Posted by mfb at 12:11 PM No comments: Links to this post

Hungry Hippo - Fun at the Zoo

Though neither literary nor musical, this lovely hippopotamus touched my heart today at the San Francisco Zoo! It's my voice you hear talking to her when she comes in for her closeup (don't know for sure if it's a 'her' but it just seemed like it to me). Enjoy!
Posted by mfb at 10:30 PM 2 comments: Links to this post 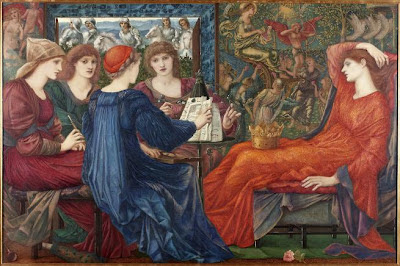 I recently took in the new "Cult of Beauty" exhibit at San Francisco's Legion of Honor Art Museum. Spanning 1860-1900, the exhibit highlighted works of Edward Burne-Jones (at left is his sultry Laus Veneris--note the eager knights in the background heading toward the languid ladies), William Morris, Aubrey Beardsley, and many others of the Aesthetic Movement in England, a mirror to the French Fin de Siecle. Gorgeous tapestries, paintings, women's dresses, furniture and ceramics! Sadly, no photography allowed, you'll have to check out the exhibit in person!
Posted by mfb at 10:08 AM No comments: Links to this post